Well…. I’ve been waiting eagerly to see Peter’s new acquisition. We’ve discussed it for weeks at his lessons and it has finally arrived – a Fender Custom Deluxe Stratocaster……

Well as a long time owner of a USA Deluxe Stratocaster I was keen to see how the Custom Shop Master Luthiers have improved on the “standard” Deluxe USA Strat.

It just so happens that my main guitar of choice is also the same colour scheme as Peter’s new baby – don’t they make a pretty picture??!!

First impressions – the grain of the wood to the body is more distinctive and the birds eye maple neck on the Custom Shop (CS) is a bit special – they have obviously saved their choicest woods for these guitars which will only improve with age.

The hardware is the same except for non locking staggered machine heads on the CS ~ the Deluxe has locking machine heads. Surprisingly the Deluxe felt quite a bit heavier than the CS explained in the manual by the “lightweight Ash” body on the CS. The main obvious difference is in the pickup dept – Noiseless on the Deluxe and “Abby Handwound” (the legendary Abigail Ybarra) on the CS. A little bit more bite and more of a raw tone from the CS.

Both played very well with the “large C” neck profile and action being similar.

A nice touch on the Deluxe which I have always liked are the abalone dot inlays, the CS being standard black inlays.

Two great guitars with the CS definitely having the edge. Does it justify the price difference?? Well Peter looks happy…. 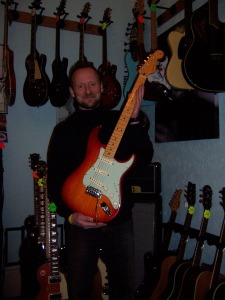 Now then Peter…mine was the one with the Birds Eye Maple neck wasn’t it???!!!!……

Footnote : Peter Westwood…..Peter has been coming for lessons now for 2 years  following in the footsteps of his son Josh. A successful Hotelier at the Family business at Stone House Hotel, Hawes, a veteran Footballer ( I went to see him playing in the cup final playing for Leyburn at Northallerton last year at the age of 48!!!), a keen Ducati rider (along with his wife Tracey who also rides a Ducati!!!) and I understand he also owns a tasty sports car!!! As you can probably gather, Peter isn’t a man who does things by half!!! Peter has always enjoyed music and saw all the classic Rock Bands of the 1970s/ 80s (Thin Lizzy,  AC/DC, Fleetwood Mac etc.) . He sings a bit and always fancied playing the guitar – but of course life got in the way – as it does!!! Now he has started lessons he is determined to catch up for lost time and he is now certainly starting to play a bit – as well as putting together a very nice collection of guitars.

Always a pleasure to see Peter on a Thursday afternoon, and if you fancy a break in the country get in touch with Peter at Stone House Hotel  and he will certainly take good care of you….. If you ask him nicely he might even let you see his Fender Custom Deluxe Stratocaster!!!