Sundance Guitars are pleased to be appointed as the sole UK and International on-line distributor of SG Percussion products.

Although the initials match our own SG Percussion is actually the brand name of Spencer Gilroy a very experienced drummer /percussionist and longtime friend of Sundance Guitars.

SG Percussion specialise in handmade Cajons designed and constructed in the UK by a drummer from a drummer’s perspective. Spencer has been a gigging drummer since 1985 and therefore has a vast experience of percussion and an ear for what sounds good!  Spencer uses his Cajon’s regularly at gigs and has incorporated numerous improvements to his designs over the last few years. SG Percussion is now in full production and offering it’s quality products to a worldwide audience.

For those new to Cajons……The Cajon is a Box drum thought to have its origins in Peru, it is a fabulously versatile instrument. With a Bass Drum, Snare and Tom sound all in one place it sounds like a drum kit in a box……..

Full details and specifications of SG Percussion products can be seen here….

For those interested in learning more about the Cajon ~ read on……

The cajón is the most widely used Afro-Peruvian musical instrument since the late 18th century.

Slaves of west and central African origin in the Americas, specifically Peru, are considered to be the source of the cajón drum; though the instrument is common in musical performance throughout the Americas.

The cajón was most likely developed in coastal Peru during the early 19th century or before, where it is associated with several Afro-Peruvian genres. The instrument reached a peak in popularity by 1850, and by the end of the 19th century cajón players were experimenting with the design of the instrument by bending some of the planks in the cajón’s body to alter the instrument’s patterns of sound vibration.

Knowing that the cajón comes from slave musicians in the Spanish colonial Americas, there are two complementary origin theories for the instrument. It is possible that the drum is a direct descendant of a number of boxlike musical instruments from west and central Africa, especially Angola, and theAntilles. These instruments were adapted by Peruvian slaves from the Spanish shipping crates at their disposal. In port cities like Matanzas, Cuba they used cod-fish shipping crates. Elsewhere, small dresser drawers became instruments.

Another theory posits that slaves simply used boxes as musical instruments to combat contemporary Spanish colonial bans on music in predominantly African areas. In this way, cajóns could easily be disguised as seats or stools, thus avoiding identification as musical instruments. In all likelihood it is a combination of these factors – African origins and Spanish suppression of slave music – that led to the cajón’s creation.

Early usage of the Peruvian cajón was to accompany Tondero and Zamacueca (old version of Marinera) dances.

In contemporary times, the instrument became an integral part of Peruvian music and Cuban music. In Cuba, it is known as a Cuban box drum that was originally used to play Rumba Yambu and now incorporated into many other styles. The bass box drum is large enough to sit on and is played with the palm, fist and fingers. It was originally a crate from shipping cod fish in Havana. The middle drum is played with spoons and was originally a box from church candles. The solo drum started as a desk drawer but has evolved into a specialized box made for this purpose. A more recent contribution to the cajón family is a tall, tapered box resembling a square ashiko. Another is the “Batajon ” an innovative cajón invented by Fat Congas of Santa Barbara, with two heads like a Batá drum.

In the 1970s, Peruvian composer and cajón master Caitro Soto gave a cajón as a present to Spanish guitarist Paco de Lucía during one of his visits to Peru. De Lucía liked the sounds of this instrument so much that before leaving the country he bought a second cajón. Later he introduced the cajón to flamenco music. 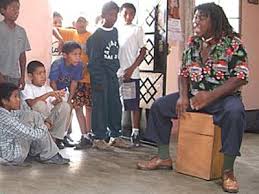 Today, the cajón is heard extensively in Cuban, Coastal Peruvian or Musica criolla musical styles: Tondero, Zamacueca and Peruvian Waltz, modern Flamenco and certain styles of modern Rumba. The cajón was introduced into flamenco in the 1970s by guitarist Paco de Lucía. While in Peru, he was given the cajón by percussionist Caitro Soto. In the Paco de Lucia sextet, the cajón is played by Brazilian percussionist Rubem Dantas.

The modern cajón is often used to accompany the acoustic guitar and is showing up on worldwide stages in contemporary music. American acoustic rock band, Boyce Avenue, uses the Cajón in some of their new covers, such as: “Here Without You” (3 Doors Down) and “Just Can’t Get Enough” (Black Eye Peas).

Convinced that you want one yet???? Read the product details here and you might just be tempted!!!